INTERVIEW: Far Out talk to the pop innovators Sparks

Next month Sparks release their 23rd studio album Hippopotamus. In a career spanning a remarkable 44-years, the Mael brothers have somehow lingered in the background of pop while consistently staying ahead of the curve. Since their commercial breakthrough Kimono My House, the duo have been a leading force in left-field pop, constantly evolving and exploring new directions. Sparks have influenced the likes of Thurston Moore, Kurt Cobain, Bjork and Morrissey, and worked with artists including Giorgio Moroder and Franz Ferdinand.

In preparation for the band’s first new album in ten years, Far Out caught up with Russell to discuss its writing, their foray into film, the political climate in America and their relationship with old and new fans alike.

FO: Thank you very much for taking the time out today to talk to us, it’s really appreciated…

Russell: Sure, sure no problem.

When did work begin on Hippopotamus?

“We started at the beginning of 2016 and we worked for about 10 months on it, we were finished at some point in October last year. It was one of our albums that we spent a lot of time on and wanted to have something that we thought was really special and fresh…and not having had a traditional Sparks album in a while, although there’s not really a traditional Sparks album, we wanted something that in our terms was more of a traditional song orientated album, as opposed to something narrative like A Seduction of Ingmar Bergman.

“We have also been working on another movie musical called Annette, so those were two projects that were really working in a narrative mode and we were really excited and really motivated to, you know, make a really song orientated album, but within our own kind of terms and our own little universe.” 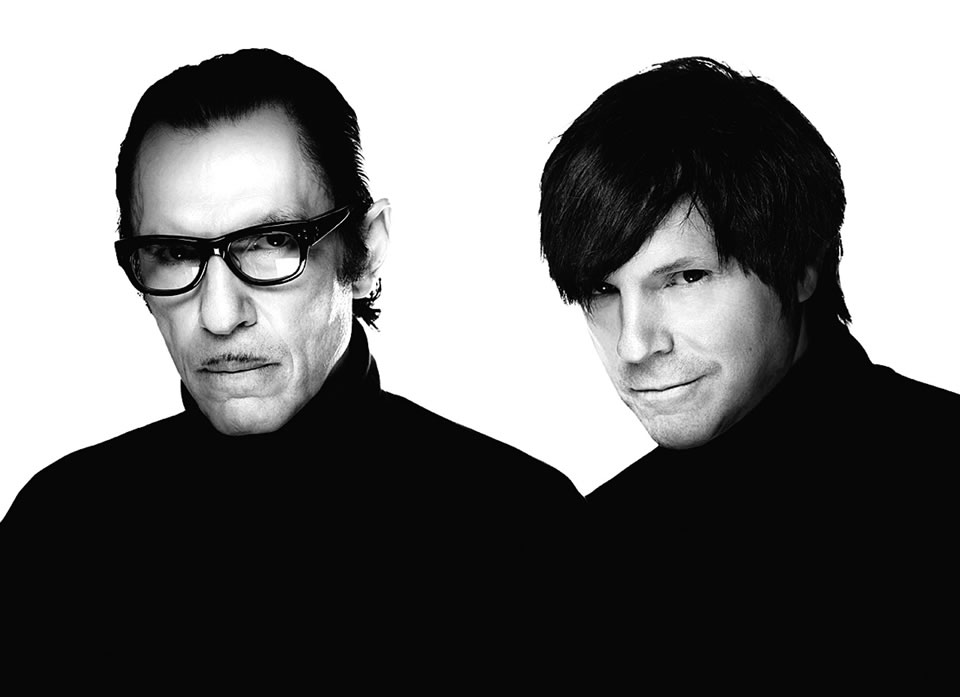 Spending the last 10 years working on different projects, did you take anything from those into the writing of this record?

“While with this, things work within the compounds of three-and-a half-minute songs, so they’re discreet little nuggets; you treat each one as though it is a complete unit. What I think we took out of those other projects, and how they affect this, is that you kind of feel more liberated to do [them], you know, just go back to doing more pop songs in a general sense.

“It’s also just really fun for us to do those, and we haven’t done one of those albums for quite a while, it’s exhilarating and it becomes fresh again, the whole process.”

Are there any topics in particular that you looked at with the album? Obviously with the change in political climate, was any of that incorporated into the album?

“No, I don’t know. People know our political leanings I think, just by the nature of who we are. It seems like too easy a target to be lambasting Trump and things like that, because it’s not our area when it comes to the music. We obviously have strong feelings when it comes to political matters, but we like to channel what we’re doing more into our songs and how they reflect in the Sparks universe more than dealing with political things.

“It seems like there are people who are better or have more of a desire to do that. It’s not that we’re not political, but we’re not political in that sense. We feel that the politicising should come in giving a strong sense of what you are musically, the politics is from the rebellion; on the approach that we have to music, where it’s uncompromising, (to us) that’s the best kind of political statement you can make.”

The lead track Hippopotamus instantaneously sounds like a Sparks song. Through your back catalogue this is a recurring theme, irrespective of instrumentation, genres or time period you can hear Sparks in there. Is this something you try to incorporate or do you think this is just a natural occurrence?

“I think it’s pretty natural now, we have a certain way we work, there’s my singing, there’s Ron’s song writing, you can’t take those away, they’re things that are always going to be there. You just have to find fresh angles and ways of doing what it is that you are good at doing. [Keep] moving on and stay fresh. We thought it was pretty uncompromising, we had the whole album done and it wasn’t actually our choice to have Hippopotamus as the lead song, but we thought it was pretty bold of our record label to decide that should be the first thing that the public hears from the album.

“It’s less of a conventional song structure, and obviously less conventional lyrically, and we thought that it was bold for them to decide that. It’s not typical of the album, the album is very varied, it is stylistically varied, and lyrically varied. So I think if you hear that one song, and think that that is what the album is you would be either very happy, or very disappointed.”

Venturing into different projects such as your radio opera album, and your new musical film Annette with Leos Carax, are there any other artistic outlets you are looking into?

“We have our plate pretty full, especially with the movie musical project. It’s been something we’ve been working on for four years. When you are doing something like that, especially with it being a story that we created and music that we created. We were fortunate to have Leos Carax want to direct the film after we had presented it to him, it’s sort of an all-consuming thing. That project has been going on for four years with re-writing and tweaking things, so that combined with trying to make a really good Sparks album and the addition of touring and having a live band, it’s kind of got our minds pretty occupied for the next slot of time.

“At the moment we’re fulfilling both of those projects and that’s about as far ahead as we’re looking.”

The tour in support of the album starts in Europe and has an extended amount of dates in England, you also debuted four of the album tracks in Edinburgh.

Do you think debuting new material to a European – particularly a British audience – is something important to Sparks?

“There’s obviously always been a very strong and loyal following in the UK and it’s always very exciting for us to tick things off there, so yeah, and this opportunity came up for us to play at the 6 Music festival which we were very excited to do, and although it was well in advance of the actual album it kind of set the launching pad for the whole campaign.

You’ve had a variety of live shows like ‘The 21 Nights Sparks Spectacular’, ‘Two Hands One Mouth’ and your most recent collaboration with Franz Ferdinand. Have you had any inspirations for how the live show in support of Hippopotamus will go?

“How it’s presented live? Well you can see footage [of the 6 music festival] and you can see what it is like and what it will be like. We have a really strong band now, so we didn’t feel we had to have applied theatrical or visual stuff surrounding it. There’s going to be a strong presentation but with the new album, it’s very ‘band’ sounding so we feel we didn’t have to necessarily contrive something, we felt we could just get by on the strength of the live performance and the album.

I read once that in your earlier career your audience consisted of music appreciators and screaming teenagers and that this was a somewhat strange combination at your concerts. Now, in England especially, your concerts are very much more prestigious or maybe even selective, like your conceptual shows or playing at venues like the Barbican. Do you prefer these kinds of dedicated fan bases?

“Well we have teenagers now too, we have a really broad audience and we’re getting the best of both worlds.

“Obviously these loyal fans that have been around since the beginning, we’re very appreciative to have them still. The other thing that is really heartwarming for us is to see young people at Sparks shows, which I think is one of the strengths of the Internet. If people are hungry they can search out new things and that’s really helped Sparks a lot – that it’s not just limited to your past.

“I think it’s also a lot to do with our approach, it doesn’t come across either musically or live as a band that’s had a history of 23 albums, we like to still go out with the approach that this is the first [Sparks] album that somebody might hear. If you go at it that way, it is a good sign and a good test to see if a young, or new audiences out there can accept and appreciate what you are doing in 2017. We found that a lot of our fans are really a new generation which is really exciting and it’s also great to keep all of the fans who have been there from the beginning as well.”

Nice one, thanks Russell!