Beatriz At Dinner, which recently premiered at Sundance and Sundance London, could be classified as a comedy of manners, except that it contains little comedy, most of which is caustic and satirical. The conflict of manners and attitudes which is the heart of the film inspire mainly sad reflections, and laughter of the uncomfortable kind. It is a play on human interaction and what lies behind it, beginning with light mockery of class distinctions, political differences, and social conventions, and gradually going deeper.

Salma Hayek leaves behind some of her more glamorous roles to take on the demanding part of Beatriz, a woman who seems to have devoted her life, happily and willingly, to the service of others. Beatriz is introduced, without dialogue, in the early scenes of the film, which describe her by means of the objects that surround her. She lives alone and without material luxury; takes little trouble with her appearance; adopts stray animals; drives an old car bearing New Age bumper stickers, with emblems of multiple religions displayed on the dashboard. By the time Beatriz arrives at the cancer clinic, where she lovingly provides healing techniques to the sick and dying, we have some idea of who she is. She is tenderly supportive to her clients, who love and depend on her, and lives to support and heal them. She is also, although apparently genuine in her kindness and her view of life, almost a caricature of a liberal, New Age, nature-loving practitioner of alternative medicine.

Her last call of the day is to the lavish home of a wealthy client, Cathy (Connie Britton), who has hired Beatriz for private massage therapy in her home. Despite the economic and social gap between them, Beatriz is welcomed as a friend. It seems Beatriz was once a tremendous help to Cathy’s daughter during cancer treatment, and ever since has been, as Cathy describes it, almost a family member. A framed photograph of Beatriz embracing the chemotherapy-bald daughter is displayed in the house.

The action takes a turn when Beatriz is unable to start her car, and is temporarily stranded. Cathy is holding a dinner party that evening for business associates of her husband, and after a perceptible hesitation, she invites Beatriz to join them. From this point, class distinctions begin to emerge. Beatriz, with her plain, practical clothing and unstyled hair seems shabby in comparison to the stylish, formally dressed dinner guests. At one point she is mistaken for a servant. Cathy introduces Beatriz to the other ladies, with outward warmth and praise for her healing skills, but clearly with an eye to explaining her incongruous presence. The women are polite and praise the healing arts, but when Beatriz attempts to discuss her work in more depth they quickly move on to the fashion and gossip that interests them more.

The gap between Beatriz and the other guests, and their friendly but condescending attitude toward her, is expressed in a great many tiny, subtle ways, in a carefully written script that gives every line of dialogue hidden meaning, and allows much of the characters’ interaction to take place in subtext. Beatriz remains calm and friendly, apparently undisturbed by the patronising friendliness, the faint undertone of amusement and disdain. We are prepared for an uncomfortable evening – as is Beatriz, who begins to fortify herself with wine.

Business talk among the men provides hints as to where the money for this opulent lifestyle comes from, along with some casual suggestions from the guest of honour, Doug Strutt (John Lithgow), that his business dealings may be considered destructive, even unethical. He jokes about public protests greeting some of the new hotels and resorts he has constructed. Strutt, at first glance, is as much a caricature of the ruthless tycoon as Beatriz seemed to be of the peaceful healer.

When the guests come together at the dinner table, the atmosphere escalates from uncomfortable to painfully awkward. Beatriz is clearly out of her element, and is especially put off by the bombast from Doug Strutt, an aggressive, overconfident man who boasts about his willingness to succeed at all costs. When Beatriz attempts to make pleasant conversation about her childhood home in Mexico, Strutt breaks in with brusque questions about her immigration status. The other guests make uneasy attempts to cover up for his crudeness, but are unwillingly to openly confront him. In spite of Beatriz’s benign response to Strutt’s belligerence, conflict between the two seems unavoidable.

As the hostess does her best to keep the party congenial, and a young and deferential colleague (Jay Duplass) tries to cover up the hostility with a continual barrage of silly jokes, the mood grows increasingly unpleasant, all the more so for being unstated. Strutt openly flaunts business successes which he knows Beatriz will find objectionable; and Beatriz, who has been drinking steadily, slowly loses her reluctance to engage. The behaviour of the other dinner guests is in reaction, acknowledged or not, to the battle of wills taking place beside them. The confrontation escalates, but each time it seems to have reached a crisis, one or the other backs down, only to begin a fresh assault, with less concern for diplomacy at each turn. 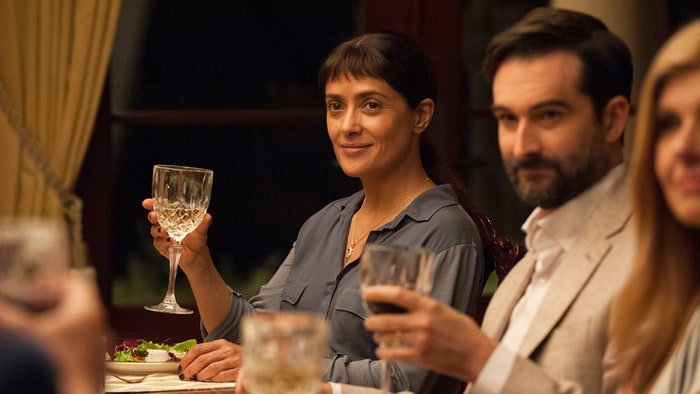 As the party grinds on, the conflict, and especially Beatriz’s presence and her contrast with the other guests’ status, attitude, and manner, brings things to the surface. The façade of equality between Beatriz and the hostess begins to crumble. The colleague’s relentless jokes become more desperate and inappropriate. The real nature of Beatriz and, to some extent, of Strutt are gradually revealed, and the true cause of their bitter dispute starts to emerge, in a carefully devised duet of conflicting values and mutual contempt. In the end, Beatriz’s deepest beliefs, her confidence in herself as healer and peacemaker, are severely challenged, and the film ends ambiguously.

Director Miguel Artera and scriptwriter Mike White, in spite of a background in primarily light comedies, have produced a subtle and intricate drama which receives the required delicate handling. It begins as a fairly straightforward story of conflicting political and social beliefs, but goes further. With the help of exceptional performances from Hayek and Lithgow, and an exemplary supporting cast, the film builds tension with exquisite slowness, moving from a superficial and uncomplicated social situation, to the deeper and more complex realities behind it, in an absorbing and moving way.

Kelly Reichardt’s most recent film, Certain Women, takes on the same challenge as Beatriz At Dinner, presenting a trio of simple human interactions, and revealing the deeper, often painful unspoken realities behind them. It’s a story told almost entirely in subtext.

The prolific Ken Loach’s 2016 drama, I, Daniel Blake, uses subtext in a more direct and obvious way. It is ostensibly a story about a man working through unending red tape after having to leave his job following a heart attack. In fact, it is a heartbreaking commentary on unofficial class distinctions and the human costs of unyielding bureaucracy.