“We hoped against hope that what we had been doing was enough to prevent a riot. It was not enough.” – Former Detroit mayor Jerome Cavanaugh

Director Kathryn Bigelow has established a reputation for gritty, suspenseful, action-packed films, with military dramas such as The Hurt Locker and Zero Dark Thirty. With her latest effort, Detroit, she takes on a formidable challenge: a dramatisation of the infamous 1967 riot in Detroit, Michigan, and of some of the more heinous police abuses committed during the course of them. Even after decades of race-related demonstrations across the US, the five-day Detroit riot, sometimes known as the Detroit Rebellion, is still regarded as not only the first major outbreak of the kind, but one of the most horrifying in many ways. It was certainly high in casualties, resulting in 43 deaths, over a thousand injuries, and more than 7,000 arrests, apart from the incalculable amount of property damage. Detroit was deliberately released on the fiftieth anniversary of the event; to further pay respects to the survivors, the US premiere was held not at a Hollywood cinema, but in downtown Detroit, where it could be attended by people whose families had been affected by the summer of 1967.

Bigelow has freely admitted in interview that she, as a white woman with no ties to the city of Detroit, is not the ideal person to tell the story. By the same token, neither is the script writer, Mark Boal, the obvious choice. This fact has been the source of some fairly harsh but arguably valid criticism. However, she makes no apologies for taking on the project, believing strongly that the story needed to be told, by anyone who had the opportunity to tell it. The film makes it clear that she did not take the responsibility lightly. If the film captures the experience of black Detroiters imperfectly, because it is told from a white perspective, it at least brings the facts into the open where, as Bigelow has suggested, it can help to start a dialogue which is long overdue in the US. 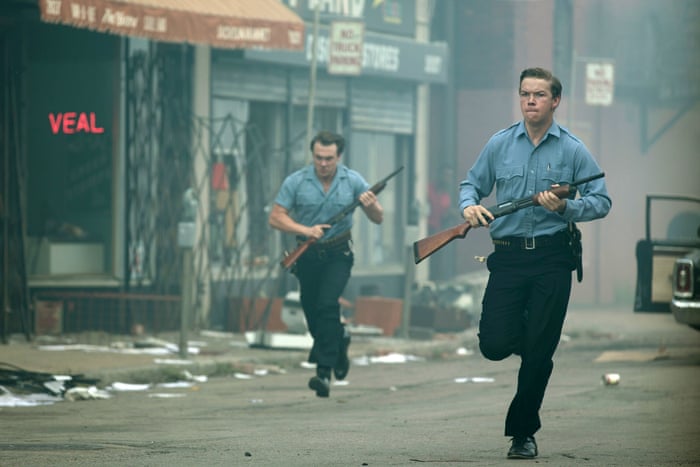 Background to the riot is minimal, consisting of introductory screen captions explaining that a great many post-war black Americans moved from the southern US to northern cities, including Detroit, both to obtain the plentiful factory jobs and to escape intense discrimination. Their hopes were ultimately disappointed. Housing in Detroit was soon divided between black and white; factories began relocating; and white citizens, not comfortable with a fully integrated city, moved to the suburbs, leaving the city itself a de facto ghetto, its unofficial but no less effective racial segregation enforced by a hostile, mostly white police force. No more detail is, at first, provided about the ongoing clash between residents and police; and when rioting breaks out, in response to a group arrest, and quickly escalates, the furious reaction is left largely unexplained. Context is provided as the movie continues, however, and the basis for the furious public protest becomes clear.

Rather than follow the riots on a large-scale, an approach which could easily begin to resemble news coverage, Bigelow narrows the focus to a handful of individuals who would become significant as the five-day, city-wide demonstration wore on – either as victims of violence, as perpetrators, or as witnesses. We gain a clearer idea of the lives of the average resident, and how they interact with police and each other, and become familiar with the key characters before the riot intensifies, and state police, the National Guard, and finally federal troops and tanks are brought in to assist. Detroit becomes something of a militarised zone, a strictly enforced curfew is established, and virtually everyone is treated with suspicion. Not only is the event re-created effectively, the viewer also begins to understand the tensions that resulted in an outburst of violence.

The focus gradually tightens on the central characters: a team of three white city police officers; a black security guard (John Boyega, known from the role of Finn in the Star Wars series); Larry Reed, a singer with rising Motown group The Dramatics (Algee Smith); a pair of white girls on vacation in the city; and several black men staying at a hotel in the city core. As the various hotel guests relax, feeling relatively safe from the mayhem on the city streets, the chief of the three police patrolling the area shoots a man for suspected looting; the other two make only a token objection. This preliminary skirmish establishes the aggressive and violent approach of the lead officer, Krauss (Will Poulter, who is perhaps best remembered as Eustace Scrubbs from the Narnia films), the relationship of the three officers, and sets the tone for the movie’s climactic scene, which was carefully pieced together from the testimony of a great many participants and witnesses after the fact.

When all the central characters are brought together at the scene of the film’s central incident, the Algiers Hotel, the action takes a serious turn when a guest at the hotel jokingly fires off a toy pistol, one which makes loud and realistic gunshot sounds. The three police on patrol nearby hear the presumed gunfire and go to the hotel to investigate a possible sniper. At first, their harsh approach to the suspects has some basis, as they believe shots were fired from the hotel; but when they find the two young white women socialising with black men, the police become more openly hostile and threatening. A group of black men staying at the hotel, along with the two white women, are lined up at gunpoint and interrogated. From this point, the world outside this hotel is shown only in glimpses as the hotel scene, played out with almost no breaks in the action and with a painful level of realism, becomes claustrophobic. While the police questioning, led by the openly racist Officer Krauss, escalates from threats to increasing levels of violence, the suspects under their control are left with no way to deflect the random aggression. Neither they nor the viewer knows which of them will be the next target of violence, how extreme the violence will become, or which, if any, will survive the night; and Bigelow’s management of the scene forces the viewer to share in the characters’ relentless terror. The prolonged interrogation is as intense and chilling as any horror film, and is frankly uncomfortable to watch.

Without lessening the suspense of the interrogation scene, the film allows peripheral characters to play their part: National Guardsmen and one or two outsiders who witness some part of the police brutality underway, and even make some effort to lessen the danger, yet cannot quite bring themselves to intervene in police business. These details are not only factual, but establish the level of de facto control enjoyed by the city’s police force at the time.

The conclusion, which deals with the legal aftermath of the night’s events, is sensibly condensed to avoid a lengthy anticlimax following the resolution of the hotel episode, but provides a courtroom scene which is dramatic and significant in its own right.

This is one film in which the importance of casting becomes apparent. It is easy to identify with any of the characters, and in particular with each of the men involved in the hotel standoff; but one inadequate or miscast actor might have ruined the tightly wound scene. To some extent, the same applies to the earlier scenes of the riot, the glimpses of the characters’ home life, and the concluding courtroom scenes. Bigelow gets the utmost out of her cast, allowing no one actor to detract from the seamless ensemble performance. The result is not only a tense and shocking drama, but also a multi-dimensional view of a historic event which gives it the attention and the scrutiny it deserves.

Ava DuVernay’s breakout drama, Selma (2014) is a moving account of Martin Luther King’s campaign to secure voting rights for black Americans, two years prior to the Detroit riots, in the face of intense opposition. DuVernay also directed the 2016 documentary ‘13th’, a study of the US prison system and how it is indirectly used to maintain racial inequality.