“The air was thick with betrayal.”

There have been countless films made about the anti-fascist Resistance movements of the 1940s, many of them exciting dramas concerning fairly large underground affiliations with ambitious programmes. Alone In Berlin is at the opposite end of the spectrum, telling a story of anti-Nazi subversion on the smallest possible level.

Based on the 1947 German novel Each Man Dies Alone (released in English translation in 2009) by Hans Fallada, which in turn is based on real events, Alone in Berlin tells the story of a simple, working-class couple’s attempt to disrupt, however slightly, the Nazi regime under which they lived. Fallada, who lived under the Third Reich and suffered repression of his writing, was fascinated by the account of Berlin factory foreman Otto Hampel and his wife Elise (their names are changed in both the novel and the movie) who felt compelled to do what little they could to lash out against the oppressive government then in place. Fallada produced a fictionalised account of their story in the form of a gritty, detailed 500-page novel, the basis for Alone In Berlin.

The film begins with a middle-aged couple, Otto and Anna Quangel (Brendan Gleeson and Emma Thompson, working beautifully in tandem), receiving notice that their only son has been killed in battle. WWII is underway, and the Nazi party controls the German population with an iron hand, brutally quashing even the most innocuous criticism of the party. The grief of their son’s death unexpectedly inspires Otto to lash out against the regime by one of the few means available to him. With no long-term plan or hope of success, but unable to remain silent, he begins writing out anti-Nazi messages on postcards, then furtively leaving them in public places. Quangel is zealous about his modest one-man protest: he goes to considerable trouble, visiting different neighbourhoods each day to avoid retracing his steps, for the sole purpose of setting one or two of his cards on a public stairway, on a windowsill, in a train station. His wife is cautiously supportive and ultimately joins in, but is fearful of the consequences, and her sensitivity to the prevailing mood in Berlin serves as an ongoing warning of what is to come. 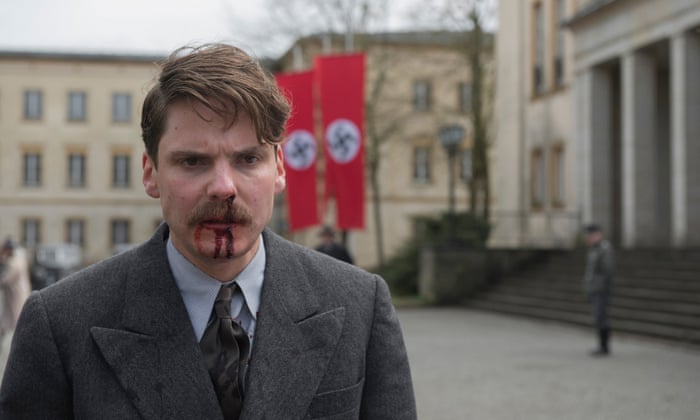 The Nazi regime is unwilling to overlook even such a trivial form of dissent. The Berlin police become involved, then the Gestapo. The fact that the source of these cards has not been discovered causes officials to suspect a large, well-organised underground movement. Ironically, it is the insignificance of the ‘movement’ that allows it to go unsolved for a considerable length of time. The Quangels continue to drop cards, containing simple, badly spelled, but heartfelt messages of opposition, around the city.

Two aspects of this film make it particularly effective. First is the recreation of 1940s Berlin – not only the physical city, but the oppressive atmosphere of continual surveillance, the necessity for all citizens to be cautious of their words when discussing anything remotely political, the awareness that anyone might be an informant. Director Vincent Perez manages to convey this aura of repression clearly, while the lead actors impart the growing dread of the Quangels, as the risk of detection slowly increases.

The second aspect, and what makes the entire story so poignant, is the pitifully small-scale of the Quangels’ dissent, the weakness and pointlessness of their gesture, especially in contrast to the danger involved. Otto Quangel in particular is stoic in the face of the ever-present threat of arrest. He feels he must do or say something in order to be, as his real-life prototype put it, a decent person. The fact that the sacrifice was made for so little gain, yet was made willingly, simply in order to be ‘decent’ in the face of widespread indecency, somehow makes the Quangels’ ill-conceived plan all the more heroic, a concept which the filmmakers manage to express forcefully.

This is not a large-scale political film with larger-than-life heroes, but its portrait of two minor casualties in the fight against fascism brings every important principle of oppression and rebellion to light.

Sophie Scholl: The Final Days (“Sophie Scholl – Die letzten Tage”). This 2005 German film deals with the last week in the life of a young student Resistance volunteer, her arrest and interrogation by the Gestapo. It highlights the ideals that gave these young people the necessary courage, dramatically but without histrionics.