Friends and family of singer Chris Cornell have paid their respects at an emotional funeral service in Los Angeles.

Cornell, who enjoyed huge success with his band Soundgarden, tragically died of suicide by hanging last Thursday at the age of 52.

In reaction, his wife Vicky claimed in a statement that her husband may have suffered an adverse side effect of an anxiety medication he took: “When we spoke after the show, I noticed he was slurring his words; he was different,” she said soon after his death.

“When he told me he may have taken an extra Ativan or two, I contacted security and asked that they check on him. What happened is inexplicable and I am hopeful that further medical reports will provide additional details. I know that he loved our children and he would not hurt them by intentionally taking his own life.”

Mourners attended the Fairbanks Lawn at Hollywood Forever Cemetery led by his widow and two young children as Soundgarden played from a portable speaker at the entrance gates.

Outside the gates, Melody Andrade also brought her four-year-old son Jude to pay respects to Cornell: “I feel like this is just as big as the death of Elvis or John Lennon. That’s why I had to bring my son,” Andrade said. “There will never be another. He’s a modern-day Freddie Mercury. I needed some closure on this.”

Cornell was cremated after a private ceremony on Tuesday, his ashes left alongside rock royalty in the cemetery. 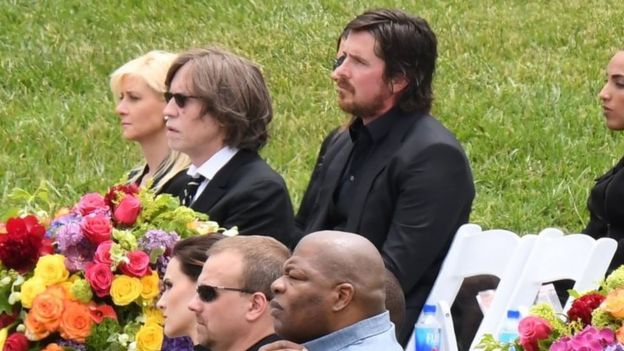