Buster’s Mal Heart: A long, strange trip through one man’s fight with the universe

Described as an ‘existential thriller,’ a description that applies as well as any to this complicated film, Buster’s Mal Heart is a strange, multi-layered drama in which reality and fantasy are so fully mixed that distinguishing the two is a major part of the viewing experience. What begins as a single, odd but straightforward story diverges into two stories about the same person, apparently present day and flashback. From there, however, the story, characters, and theme continue to divide like amoebas, each with their own perspective and each, in their way, reflecting upon the others. Sound confusing? It is – but it’s also a fascinating presentation.

In the opening scene, a ragged, unkempt man (Rami Malek) is in a dim, snowy wood, fleeing from armed men. He shoots back at them with a rifle. He escapes, and we next see him crouched next to a campfire. He awakens on the snowy ground, as police announce through a bullhorn that his camp is surrounded. He is addressed as Buster. We are shown, through news items, that Buster is a local vagrant who regularly breaks into vacant summer cottages for shelter and food.

Before this storyline can develop, we are introduced to Jonas, who is apparently Buster at some earlier date and under very different circumstances. Jonas, who is well groomed and neatly dressed, works as night concierge at a large hotel. He and his wife and little daughter live with his in-laws, a situation which causes some stress. Jonas’ mother-in-law is deeply religious, overbearing, and indirectly critical of Jonas’ Hispanic background: she disapproves of his speaking Spanish to his daughter. Jonas’ bilingualism is an early reference to his dual nature; he is “a man already in two worlds” as Smith commented in interview. Jonas is doggedly saving money, hoping to fulfill his dream of moving to the country and becoming self-sufficient, something he has built up in his own mind into a kind of liberation.

The film moves smoothly back and forth between the earlier experiences of conventional family man Jonas, and what seems to be his later life as the vagrant and criminal, Buster. Clearly, how his life took such a drastic turn is the central question; but the answer comes very gradually and only after following Jonas along a winding path with a great many unexpected detours. One of these detours leads to a recurring scene in which Buster is seen adrift in a rowboat, apparently lost at sea. The main character is named Jonas for a reason: his story parallels the Biblical story of Jonah and his struggle against God and his own fate. The rowboat scenes appear periodically, to illustrate Jonas’ ongoing and hopeless struggle.

The film’s pivotal event is the arrival of a stranger (D J Qualls) at the hotel where Jonas works the night shift. The man tries to check in, but is turned away because he has no ID or credit cards. He begins talking to Jonas about his odd philosophy of life, identifying himself as ‘the last fee man,’ coming across as more and more unbalanced as he unfolds his various conspiracy theories. The stranger claims to be privy to government secrets, on the run from would-be assassins, and aware of the coming of a cataclysmic event he calls The Inversion. It is worth noting that the film is set in 1999, a time when a great many people were expecting the Y2K catastrophe, and connecting it to various pet paranoias. However mad his ideas appear, the stranger comes across as supremely confident of his information, a man ahead of his time; the costume designer based his appearance on that of a young Steve Jobs.

Jonas is nervous of the man, but also reluctantly fascinated by his rantings. The stranger’s ideas connect to Jonas’ frustration with his life, his inability to escape his circumstances and find the freedom he seeks. Soon, Jonas is in daily conversation with the stranger, who reassures him that ‘the system’ is rigged to prevent people like Jonas from moving forward, from making progress. The conversation takes a more dangerous turn, as the stranger begins to hint that the unfairness of the established system makes acts like theft ethically acceptable. We can see the potential for the unravelling of Jonas’ life. 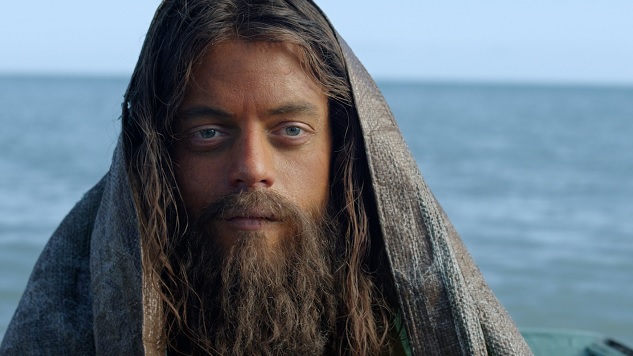 Director Sarah Adina Smith says Jonas reflects the ‘spiritual crisis’ of her native America – it seems to address this both in the conventional sense of religious uncertainty, and in the sense of ordinary people feeling demeaned and depersonalised by their work in an inhumane, soulless environment, and disconnected from society and from any kind of meaningful power. Smith wanted to show one man fighting with the universe in two separate, extreme ways, represented by the sea and the mountains – the mountain scenes being filmed on location in Montana, whose landscape provides the sense of beautiful desolation the film calls for. One of the characters tries to seek freedom by removing himself from society altogether, the other is swept out to sea and forced, like the Biblical Jonah, into a confrontation with God and his own nature.

The account of Jonas and his growing dissatisfaction continues to alternate with scenes from Buster’s life, which begins to make more sense in the context of Jonas’ gradual slide into rebellion against his life and the rules controlling it. Jonas, influenced by the ‘last free man,’ questions everything he has lived by, and begins to rail angrily against what seems more and more like injustice, a way of life imposed on him by fate. But the story never stays on a single track for long. Doubt is introduced as to which parts of Jonas’ life are real, which are fantasy. The rowboat scenes seem clearly unreal and symbolic, but gradually, more and more aspects of Jonas’ life come into question. The ‘last free man’ may not have been real, but merely a projection of Jonas’ mind. Some of Jonas’ memories may have been dreams. His life as Buster may be merely his own worst fears. Ultimately, the story could be seen as any number of combinations of reality and fantasy, including some surprising options. The film ends unresolved, just as we think we can see the likely outcome, with a brief scene of Jonas either falling into a dream, or waking from one, in a lady-or-the-tiger conclusion.

This summary does not capture the quirky and compelling way in which the film unfolds. Buster’s casual appropriation of luxury cottages contains a great deal of dark humour combined with a sense of desolation, as do many of the rowboat scenes. Buster is guided by occasional advice from random sources, such as television psychics, and even from his own former self, Jonas. The story provides an ongoing mystery, as we attempt to determine how Jonas’ past has developed into Buster’s future, and what will become of him. The symbolism borrowed from the Biblical tale of Jonah appears in unusual contexts. All these elements combine in a rich blend of imagery and ideas. Also, there is often an unexpected overlap of the real with presumed fantasy: for example, while watching television in a borrowed cottage, Buster sees a news report on a message in a bottle recovered on a California seashore; it is the very message which Jonas threw in the water from his rowboat – a scenario we had assumed, until now, was purely symbolic in the context of the story. He watches as his own image appears on the screen, and his mother comes on camera to deliver a message to her son, one which parallels a message from God to Jonah. Is Buster hallucinating? Is his experience of being adrift at sea, paying the price of his rebellion against the universe, meant to show reality? Instead of resolving questions, the film continually presents us with new ones.

The film’s casting seems designed to attract a minor cult following, featuring Rami Malek from the unusual, counterculture television series Mr Robot, and D J Qualls from Z Nation and The Man In The High Castle. Nevertheless, both actors do a remarkable job with demanding and unusual roles. But it is Sarah Adina Smith’s writing and directing which take a concept which could easily turn into a muddled and self-indulgent mess, and make it a strange and riveting exploration of larger-than-life ideas.

The Machinist (2004). Writer Scott Kosar and director Brad Anderson, coming from a history of minor horror movies and television thrillers, collaborated to produce a dark, edgy masterpiece. Factory machinist Trevor Reznik (Christian Bale) is falling apart, sleepless and starving himself to a skeleton, over a guilty secret. As Trevor has hidden the event even from his own consciousness, he discovers the truth along with the audience, who piece together the facts from the mixture of reality and fantasy that Trevor’s life has become, as he struggles to remember and find vindication.